The City of Chicago covers an area of 60,000 hectares and sits 176 meters (578 feet) above sea level on the southwestern shore of Lake Michigan. At 190 km wide and 495 km long, its the 5th largest body of fresh water in the world. The city is traversed by the Chicago and Calumet rivers. Chicago's extensive parklands, including 3,000 hectares of city parks attract an estimated 86 million visitors annually. 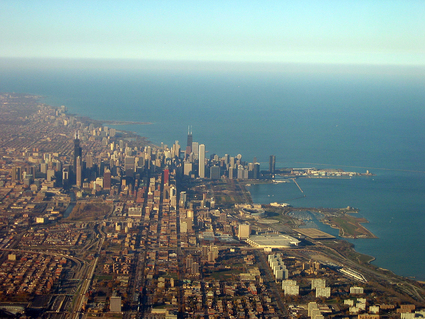 © Copyright 2013 [Roy Tennant], FreeLargePhotos.com
The city lies within the humid continental climate zone, and experiences four distinct seasons. Summers are hot and humid, with a July daily average of 75.8 °F (24.3 °C). In a normal summer, temperatures exceed 90 °F (32 °C) on 21 days. Winters are cold, snowy, and windy, with some sunny days, and with a January average of 25.3 °F (−3.7 °C). Temperatures often (for 41 days on average) stay at or below freezing for an entire day, and lows of 0 °F (−18 °C) or below occur on six nights per year. Spring and autumn are mild seasons with low humidity.

Although Chicago is known as the Windy City, it is in fact less windy than many other major American cities. Average wind speeds range from 8 miles per hour (13 km/h) in late summer to 12 miles per hour (19 km/h) in spring months

Chicago has four main sections: Downtown (which contains the Loop), the North Side, the South Side, and the West Side. The three sides of the city are represented on the Flag of Chicago by three horizontal white strips. These sections can further be informally subdivided or grouped, for example as shown on the map (right). Further sectional references are the Northwest side and the Southwest side. In the late 1920s, sociologists at the University of Chicago subdivided the city into 77 distinct community areas, which can further be subdivided into over 200 neighborhoods.

Electricity for most of northern Illinois is provided by Commonwealth Edison, also known as ComEd. Their service territory borders Iroquois County to the south, the Wisconsin border to the north, the Iowa border to the west and the Indiana border to the east. In northern Illinois, ComEd (a division of Exelon) operates the greatest number of nuclear generating plants in any US state. Because of this, ComEd reports indicate that Chicago receives about 75% of its electricity from nuclear power. Recently, the city started the installation of wind turbines on government buildings with the aim to promote the use of renewable energy.

Natural Gas is provided by Peoples Gas, a subsidiary of Integrys Energy Group, which is headquartered in Chicago.

Domestic and industrial waste was once incinerated but it is now landfilled, mainly in the Calumet area. From 1995 to 2008, the city had a blue bag program to divert certain refuse from landfills. In the fall of 2007 the city began a pilot program for blue bin recycling similar to that of other cities due to low participation rates in the blue bag program. After completion of the pilot the city will determine whether to roll it out to all wards.

Back
Proudly powered by Weebly