Charlotte is the largest city in the U.S. state of North Carolina and the seat of Mecklenburg County. In 2011, the estimated population of Charlotte according to the U.S. Census Bureau was 751,087, making it the 17th largest city in the United States based on population. TheCharlotte metropolitan area had a 2011 population of 1,795,472. The Charlotte metropolitan area is part of a sixteen-county market region or combined statistical area with a 2011 U.S. Census population estimate of 2,442,564. Residents of Charlotte are referred to as "Charlotteans". 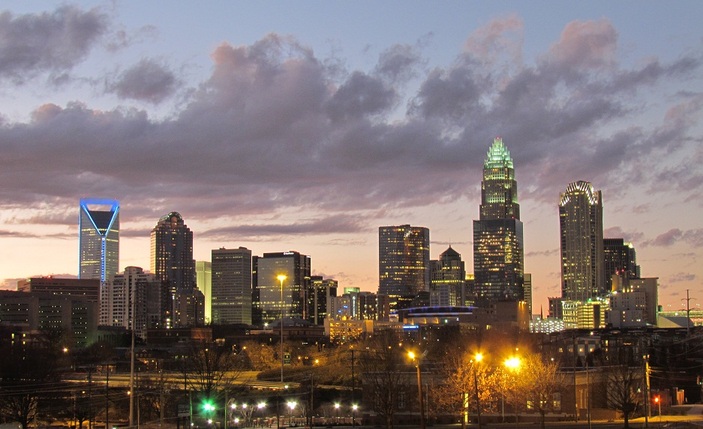 Charlotte, like much of the southeastern United States, has a humid subtropical climate (Köppen Cfa), with four distinct seasons. Winters are short and generally cool, with a January daily average of 41.3 °F (5.167 °C). On average, there are 59 nights per year that drop to or below freezing, and only two days that fail to rise above freezing. April is the driest month, with an average of 3.04 inches (7.7 cm) of precipitation. Summers are hot and humid, with a daily average in July of 79.6 °F (26.4 °C). There are 44 days per year with highs at or above 90 °F (32 °C). Autumn is generally drier than spring.

The highest recorded temperature was 106 °F (41 °C) on July 1, 2012. The lowest recorded temperature was −5 °F (−21 °C) on December 30, 1880; February 14, 1899; and January 21, 1985. Charlotte is directly in the path of subtropical moisture from the Gulf of Mexico as it heads up the eastern seaboard, thus the city receives ample precipitation throughout the year but also many clear, sunny, and pleasantly warm days. On average, Charlotte receives 41.6 inches (1,060 mm) of precipitation annually, with summer being the wettest season. In addition, there is an average of 4.4 inches (11 cm) of snow with more frequent ice storms and sleet mixed in with rain. These storms can have a major impact on the area, as they often pull tree limbs down on power lines and make driving hazardous.

Back
Proudly powered by Weebly